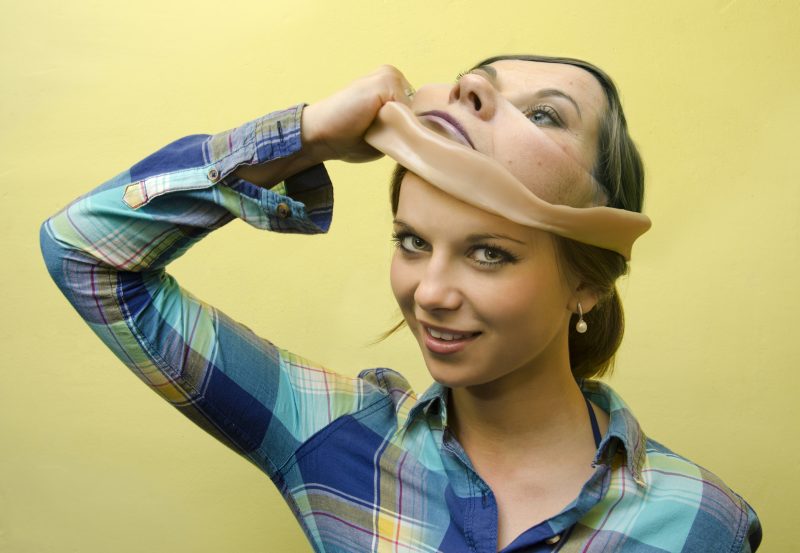 Behind The Mask of Being Transgender

Behind the mask of being transgender, deals not with the mask of the post-transition, but the mask that was worn before it, in addition to the mask others perceive. As a transgender women, gay friends often asked, “why do you want to be someone else?” I told them I don’t, I want to be me.

Can changing your gender presentation make the core of You more interesting, more endearing to strangers?

Recently a friend said with glee that “I’m so much more popular as a woman; people give me more attention and respect than they ever did when I was presenting as a guy.” Is this actual reality, wishful thinking, misperception or something more?

In another situation, another friend went through a post-op transition. She then denied her male past and refused to acknowledge it. According to her, she was now the women she’s always been; and she shunned the trans community that she for so long existed in. But I am left to wonder that if she denies and hides her past, is she now not hiding behind a mask of her own making, coming out of one closet only to reside in another?

I’ve often said that being transgender is the most confused, conflicted, and distracting, yet most amazing journey I’ve ever encountered.  Eighteen years after coming out that opinion hasn’t changed. With the clarity that only time can provide, however, I have at times modified previous views and/or, with fresh eyes, gleaned something entirely new from past incidents years after they’ve occurred.

Behind The Mask of Being Transgender

Coming OUT in 2000 was a strange mix of apprehension, fear and exuberance for me; the early steps of trepidation and liberation quickly evolved into a confident stride. I was comfortable in who I was, and no longer willing to allow the words and/or expectations of others to define Me. And with this confidence my defensive walls came down, my guard no longer required.

Passing became unimportant;  I was a male-born woman and was content to let people interpret that as they would. I travelled out and about, and I believe that it was that openness that provided me with the opportunity to interact with so many different walks of life; at gay and trans events, mainstream venues and events: even a mainstream poetry convention with 1,500 regular folks.

I once wrote that: “Emerging from behind the mask of a life not truly mine, yet inadvertently one of my own design, I stood naked before the world, refreshed and unafraid; confronted with the truth of Me as only I knew it to be, while others could only look on with bemused wonderment, envy, concern or disdain.”

What I found most informative was not how I interacted with people, but rather how they interacted with me — in my varying degrees of gender presentation. I watched, I listened, and paid close attention to their initial reactions, and then, sometimes, the change that occurred within them.

When trans people come out, they remove a mask that had been hiding fragments of who they are; secret feelings and desires previously bound.  By removing that mask they are free to grow, evolve and re-invent themselves; in other words, to finally reveal on the outside that 100% of them which, in part, was hidden on the inside.

The onlooker of a trans person [in their newly defined gender presentation] doesn’t see a mask-less person; they see someone hiding behind a mask of gender nonconformity.  They have an instant perception and expectation of who that person is, what they’re hiding from, and/or what’s broken within that person. This brings many reactions, including, but not limited to, pity, love, hate, curiously, and/or rage.

Ironically the trans person, who is perceived to be hiding, is in many cases more authentic and less guarded than most “normal” people.  And, if and when the onlooker transcends that gender presentation, it is the discovery of this reality that I’ve found intrigues them the most; sometimes gaining their respect, admiration, and even envy.

It was, I believe — and was often told — because I could “stand naked, refreshed, and unafraid” in the comfort of knowing who I was, so completely devoid of any approval or praise — that I usually received both.

Conversely, it was through their opinions and evolution that served as a mirror in whose reflections that I gleaned most of my own insights.

So let’s get back to the original question of all this storytelling.  Don’t be deceived and lulled into believing that through a new female transition or female presentation you’ll gain more respect or the interest of strangers. More likely, they’ll be drawn to you because (a) you are a novelty, or (b) the core of you is now more open and honest — regardless of what gender presentation you wrap it up in.

Defying another person’s perception of You — your hopes and dreams — is not in of itself what draws people in; it is merely the catalyst that allows the real you to shine through.

So, behind the mask of being transgender, it may be that your gender non-conformity may pique their interest, but if and when they’re able to transcend your gender, only then are they likely to come to know, admire, like, and/or appreciate the You need to emerge from behind the mask of their own creation.