Brianna Nicole Austin was born a man in the baby-boomer age, excelled at sports and would have been viewed by most as an athletic and good looking guy — despite the long-kept internal secret of gender dysphoria. 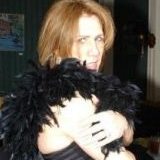 During her years as a man Brianna  has been a career entrepreneur, launching and operating several companies ranging from small endeavors to others generating as much as $500,000 a month in revenues.There were critical and/or financial successes in the fields of transportation, and entertainment.

Brianna’s first memories of feeling different were set free when her older sister engaged in dress up one day. She didn’t know what these feelings were, or why dressed as a girl ignited a sense of well-being, but found it deliciously curious.

When her sister ran off to get their mom and said “come see how cute”, Brianna panicked; she raced to the door, and, with her shoes slipping on the hardwood floor, fought furiously to prevent them from entering. Her mom quickly lost interest of the kids goofing around.

Brianna went into the closet on that day, where she remained for another 35 + years, dressing up in private.

All through the decades that followed she was compelled to keep dressing up, always in private, not knowing then that each episode was a need to push the “girl experience” a step further. But to what end?

By 2000 she needed to explore this compulsive behavior, figure out where it stemmed from, and cure herself of it. The result was a self-exploration with almost reckless abandonment. But the more she came out, the more comfortable she became with who she was, and was soon living a girls life.

Self-acceptance, along with the “ability to explore without fear of what you may find”, she says is one of the keys to happiness. Her mantra for life is to “be truthful always” with thyself and others.

You can read more about this journey in the forthcoming book “The Last Woman & Me.”