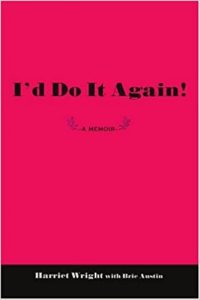 A Life Unscripted I’d Do It Again!Author Harriet Wright’s priceless adventures began in her mid-twenties when Jimmy Durante plucked her from the waters of the Aquacade at the 1939?40 World’s Fair to join the first chorus line of the famed Copacabana Supper Club.Harriet soon became part of the nightclub crowd-mentioned regularly in the most famous of the New York gossip columns. She traveled with the rich and famous, raised a son who gained his own notoriety, and had more adventures than Forrest Gump. A Life Unscripted I’d Do It Again! recounts her journeys to a life in Cairo, a romance in Tunisia, a weekend in jail, a six-week Caribbean escapade with Jose Ferre, and much more!Her son Clovis, a rebellious teenager, became the youngest designer to ever win the prestigious Coty Critics Award, the fashion industry equivalent of an Oscar. His success provided Harriet with a backstage pass to the world of fashion. But Harriet also had her share of heartache, including the suspicious death of a husband.A Life Unscripted I’d Do It Again! is the riveting and entertaining life story of a resilient woman who refuses to let life pass her by. Instead, she lives it-to its fullest extent!

Read it on Amazon